Lately I’ve been having a good time with the very cool Scarlet Heroes RPG (DriveThruRPG link). Recently I paired it with Hot Springs Island, and was talking a little bit about how I’m running it on the Mythic GME Discord channel. A couple of people said they’d be interested to see how that worked, and so I thought I’d outline a bit more of what I’m using, and how it all gets pulled together when you’re running a solo game for yourself.

I wouldn’t say it’s a compact process; this is what my floor looks like right now: 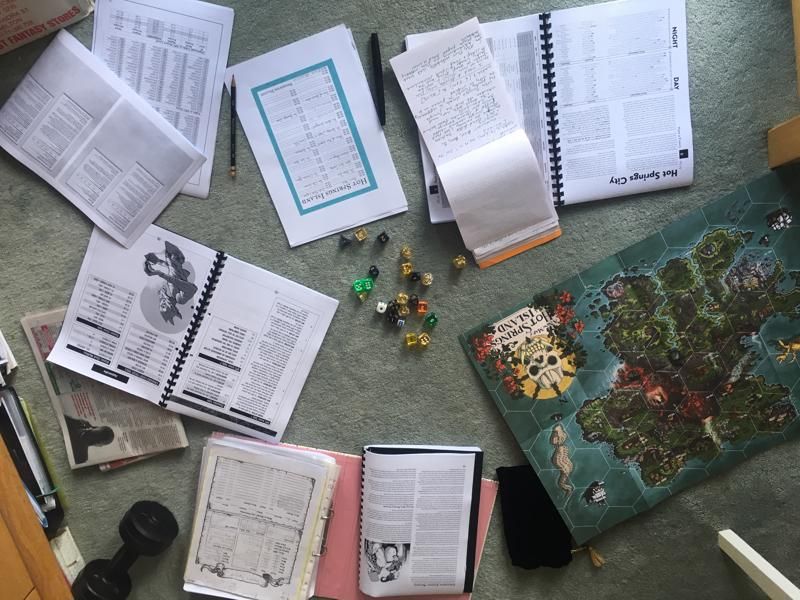 –but it’s certainly a fun one.

Before I really start, if you’re new to solo roleplaying there are a lot of resources around. A few in particular that I’ve found quite good are:

Scarlet Heroes is designed for the solo (or single player with a GM) roleplayer. It takes many conventions that are the standard of most roleplaying games and streamlines things to make encounters and adventuring actually achievable for a solo hero. (The biggest changes are to do with combat; damage dealt by an enemy goes way down, while damage dealt by a hero is applied to a monster’s hit die.) It’s not everyone’s cup of tea, but I’ve found it’s a pretty easy way to slot into an existing adventure (or random hex crawl, whatever floats your boat) without too much tweaking required.

Hot Springs Island is a sandbox, and a very good, dense one. As a sandbox, it doesn’t give players set adventures, but a playground to roam around in, with monsters and wild settings galore, factions who have loong histories, lots of random adventurers to encounter, treasure, mystery, and history. There are some good and not-so-good aspects to it (there’s so much going on that at times you don’t feel like you have much breathing room), but for a blow-your-hair back experience, it’s pretty good.

Here’s an example of a Scene (using structure as advised by Mythic Game Master Emulator):

Going to run an adventure on Hot Springs Island with Scratch Zaphod. Not sure how he will get XP / level up / get off the island! But he will be shipwrecked on his way back from his fishing adventure. I’m randomly saying he is washed up on [HS-13]. his bag is on his back and everything’s tightly strapped to his body. (Is the fishing pole ok? (50/50) 9+3=12 Yes. Chaos Die:10, but I’m not sure how to best use the chaos die in a sandbox game.) This is a Mythic check that uses three d10 dice (using the Mythic Variations II method of rolling), which you use when you want to check whether or not something happens. A roll of over 11 is a “yes.”

Scratch comes to, on a black sand beach. A huge basalt formation rises up. At its base are chunks of basalt and strange twisted plants.

He looks around, but sees only thick jungle. Time of day = 5th watch (10pm-2am.) So it’s dark. I’m going to say his gear is all thoroughly wet — including his lantern wick. He spreads what he can over the rock and spends the next few hours shivering, unable to sleep.

As dawn breaks (start of Watch 1), Scratch decides to look around. He discovers a trapdoor leading to a dugout, with crates and barrels of food and water lining the walls.

there are specific rules around time in HSI, including what you can do in a “watch,” or period of about 4 hours. Exploring a Point of Interest (POI) is one of them.

Relieved, he refills his waterskin and grabs some more rations (5).

In retrospect, this was too short for a “watch.” I should have combined it with the next section.

He emerges from his new hideout [HS-13-03] and tries to figure out which way to go. In the daylight he can see a mountain looming upward to the west. On the other hand, he could follow the coast and see if he can find out what happened to the others on the ship…

When entering a new hex, you roll for an encounter, then a POI, and then you resolve the encounter. Encounter: Adventurer, Ada (p. 178) Discover: [HS-08-01] The Whale Graveyard.

Scratch sees more basalt outcroppings, and many whale carcasses lining a half-mile stretch of beach. There is a woman with black braided hair here. She’s wearing a blue sash, and purple robes.

Time for UNE, the Universal NPC Emulator. This time around I just ask what her motivations are. I get: “manage lust” (woop), “compel patience,” and “relate music.” A bit of swift interpretation later I come up with: she’s a romantic, passionate, but someone who has indulged that passion too many times in the past and is now always holding herself back in ways of the heart. (She’s probably been burned.) She is acutely aware of pleasant sounds and will often tell others if she notices something that pleases her.

She seems friendly enough! And so Scratch asks her:

For the answer to these I again turn to Mythic.

“Where are you? This is the famously unknown Hot Springs Island… I came here with my cousins to explore but we’ve somehow become separated…”

“Uh, I’m not sure about civilization nearby. I heard there was a village on the coast…somewhere. But I haven’t found it yet.”

“Yes, I did see someone along the shore, back that way.” (Points NW)

“Looking for my cousins. And listening to that beautiful surf.” She closes her eyes and smiles.

I think Scratch is going to take a closer look at the whales (Fisherman 1 trait), and then will ask if Ada wants to travel with him (Grizzled Appeal 2)

I love the randomness of the Scarlet Heroes trait system

He notices the whales are quite fresh, and seem to have been harvested with tools.

So you can see how it plays out, using all of the different materials. Now I have my head wrapped around Mythic I find I can do the “fate checks” without looking anything up, and only if there is something more specific will I refer to the book. The above isn’t particularly action-packed, but you can see how things like finding hidden treasure (or not finding it, as the case was here) can play out, and not be so totally railroaded, despite “GM knowledge.”

I’ll finish writing this up once I’ve played it, and then will put a link to the record vault in the RPG section here on the blog.


Previous: Back on track, and an interesting podcast Next: Good And Bad